Deload! Travel! Being a bit ill!

Monday: So much coffee, then Cyclebox, then crossing London at rush hour, which was comparable in intensity. Working away is fun, & my gym membership allows for the occasional visit to another location so I always manage to find somewhere to work out. Had it been a running day I would have gone out with London Frontrunners, as their Monday runs are my favourite route.

Tuesday: first symptoms of a cold when I woke, but dosed up on meds enough to have a go at a gentle 5km & mini strength session in the evening. It wasn’t great but it felt better than doing nothing.

Wednesday: Still sniffly, so gave the planned session a miss.

The intention had been 5 miles, comprised of 5x1000m threshold runs with 3-4 mins recovery in between. This is one of the first treadmill interval sessions I ever did a few years back when trying to increase my speed. It can be a bit brutal on the last couple of repeats & I measure my fitness level broadly by whether I have to jog, walk, or stand astride the treadmill gasping during the recoveries.

Thursday: meant to be an easy run, but subbed Wednesday’s interval session onto today. I managed four 1km repeats: the fifth came to an end after 500m, I slow-jogged to 8km and called it a day. Still not 100% well and I gave it my best shot, but I wasn’t feeling right at all.

Friday: rest day, coinciding with pay day & going out for a lovely meal with friends. Possibly the best way to spend rest day. I went to the gym for some light lifting, which was nice.

Saturday: 6 miles slightly tempo, which was nice after the rest of the week’s running had been indoors due to ice, illness or travelling. A bit icy underfoot, but still fun. The pace wasn’t as fast as I would have liked, but there will be healthier weeks for that.

Sunday: getting bored of circular routes, so I ran to the city in the sleet, went for coffee afterwards & got the train home. Plan said 9 miles, I ended up doing nearer 12, but it was very very steady due to icy footpaths & good Frontrunners chat.

Total miles: 26ish, so missing a session has made no difference to weekly mileage, hooray. January’s total miles was 119, which is great and way more than I was doing this time last year. Bodes well for the springtime.

Nutrition: good. Working away for half the week but managed to stay on track. 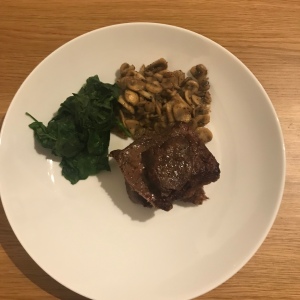 Feeling: could be better. Mild illness sucks: just enough to be irritating & sneezy but not enough to be off work or lie on the sofa feeling miserable. If I must be ill I would rather it be a full-on confined to bed state of affairs, rather than this rubbish that convinces me I’m fine for the gym until I actually get there. Luckily it doesn’t seem to have lasted too long & I am better now. Epsom salts baths & foam rolling are a regular feature.

Week 6 is a step up: more miles, more speed sessions. Should be fine, as work is looking a bit quieter (*hollow laughter*) and I can fit some lunchtime sessions in. I am planning some split sessions in this training cycle, having only done this through necessity last year when I had to do a 20 mile run on a treadmill because of the snow, but I have read a bit about split sessions & seen some Instagram folk giving these a go. Doubling up strength & running in one day is always good, split running less so, but it can be a bit easier on time management. We will see.