Tuesday: 8x400m sprints, 1km wu/cd. 4 miles total. Felt quite good – sprinting at about 13kph, which is sustainable over all the reps. Faster would be good, but I start needing walk breaks between the last few reps so I’d rather get to continuous running first rather than speeding up the faster bits. Improving all the time though.

Wednesday: easy run home from work, with some looping to get it up to 7 and a half miles. I couldn’t find an extra half mile in my legs or my mind, & I left work later than intended so I was concerned with getting home for dinner anyway. Nice weather made it OK though. 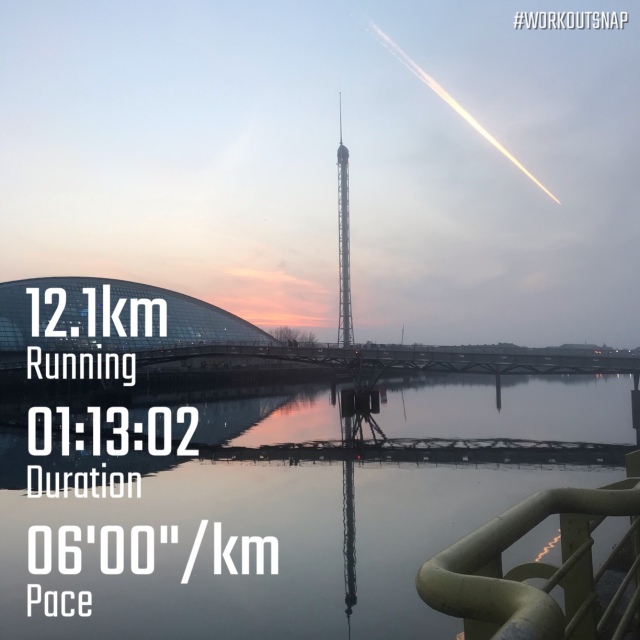 Thursday: when it all started unravelling a bit. Had intended a 6 miler with GFR, but the following events occurred:

I dealt with this by  going home. Decided dinner was a better idea than trying to force anxiety & stress into a 4 mile late evening jaunt; if the run hadn’t gone well I would have been beside myself with irritation & even closer a sneaky hate spiral, if crying in the gym changing room wasn’t close enough to that anyway.

The fretting about being a ridiculous excuse for a human only lasted a couple of hours, & I was fine with an impromptu rest day. Work has been stressful and I was quite tired.

Friday: Ended up as a better day for a quick 4 miles as I had a couple of long train and road journeys and an early start so I was more than ready for it by late afternoon. Managed a good progression, increasing the pace on each mile.

Saturday: easy 8 miles, then a nice brunch and also a nice lunch because why the hell not. Hit up Absurd Bird for chicken & fries. 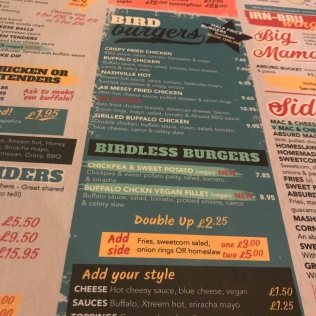 Sunday: 17 miles, & the first time I’ve followed a proper nutrition schedule with regular gels at 6 miles, 10 miles & 14 miles. Also a Lucozade towards the end because I was thirsty. By the last couple of km I was getting achy hips and legs, so I’ll need to keep an eye on form and posture over the next couple of weeks to stop this from getting any worse.

Total miles: 41. 136 total in February, which is the most mileage in one month EVER.

Nutrition: fairly good. Thai curry, scrambled eggs, aubergine & grilled chicken all featured, as well as spicy overload at AbsurdBird. On a couple of the busy work days, I mostly had biscuits and coffee, which isn’t great but I do prefer running on an empty stomach over a full one and 4 miles is fine to do on just caffeine (NB this is not official coaching advice, do not do this)

Getting back into overnight oats rather than porridge now the weather’s a bit milder. Still eating too much frozen fruit.

I really fancied Supernoodles after the long run, so that also happened. Made up for it with real food later.

Feeling: Physically, fine. Plenty of stretching time and plenty of quality sleep. Getting to the stage where I’m more than happy to go to bed at 10pm. Not enough foam rolling, because I keep forgetting about it and need to keep the rollers in the living room to remind me they exist.

Mentally, not so fine. Thursday was particularly not good: after being at work 8-6 and the entire day being really stressful, I was quite looking forward to a run, but getting annoyed with myself for firstly missing the club run and secondly not even having a full set of kit with me put me in a really shit mood. Friday was almost the same until I actually got out running, because I’d spent the day driving around with only half a mind on work, then when I finally got back to the office after 4pm there was still loads to do and I had to make a decision to leave things unfinished and put my trainers on instead. The run itself was fine enough, but I am prone to negative thought patterns and I spent most of the run worrying about work, and then an hour afterwards worrying about the run, & then more worrying about how stupid I was to have forgotten my kit the previous day, plus work, along with several other uncontrollable aspects of my life at the moment. I am starting to recognise what I need to do to get out of these thought patterns and stop them from getting too catastrophic, but it’s not always that easy.

I’m glad the weekend miles went well. The longer runs are easier because I’m not under (much) time pressure with them. The midweek speed sessions, never more than 5 miles, are sometimes stressful because I am trying to fit them around the working day. I haven’t managed a lunchtime session for a couple of weeks due to other commitments, but the double benefit of getting the miles done and making sure I have time away from my desk during the day is really important.

With only 55 days to go until the first marathon, I’m heading into the next peak week keen to stay injury-free. I have another race coming up  but if I’m not feeling the pace on the day, I’ll certainly be taking it steady. The medal will still be there at the end. 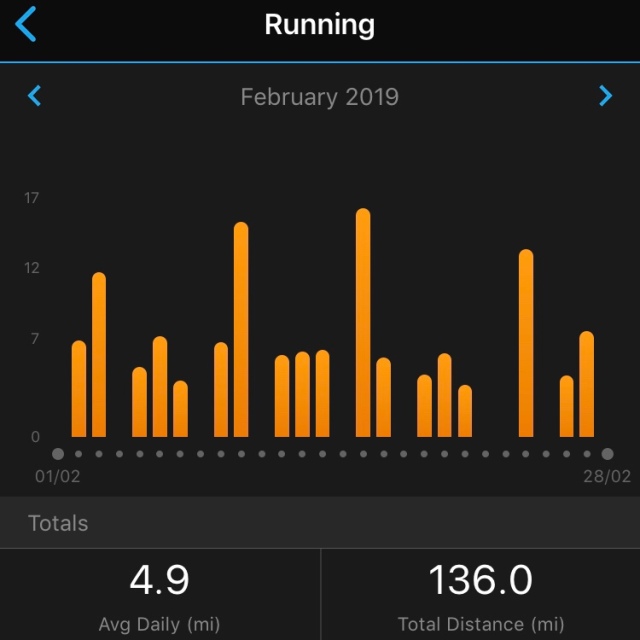